What is a Medwakh Pipe?

Use this guide to better understand what is a Medwakh pipe.

What is a Medwakh pipe?

Medwakh, sometimes spelled ‘Midwakh’, is a pipe used to smoke a type of Arabian tobacco called ‘Dokha’. This strong Arabic tobacco is smoked through pipes with a characteristically small bowl – enough for a couple of smokes at a time, more than enough to give you the buzz or headrush that Dokha is famous for.  In fact, the word Dokha literally translates into English as ‘dizzy’.

For hundreds of years, the Medwakh pipe has been used to smoke Dokha, a sifted tobacco product that originated in Iran.

Medwakh pipes and Dokha tobacco are popular in many countries around the Persian Gulf and across the Middle East where the Dokha is grown and dried in arid desert conditions. Classic Medwakh pipe design is heavily influenced by the culture and history of the region, evident in the materials used, colours and patterns.

What makes it a Medwakh?

Although there are no rules around what makes a tobacco pipe a Medwakh, the style of a Medwakh is very distinctive. Most notably, the Medwakh pipe bowl tends to be much smaller than Western tobacco pipes as the Dokha itself is more concentrated and therefore less is needed to be smoked. They’re traditionally around 6inches long but can come in a whole range of shapes and sizes.  One of our most popular Medwakh pipes is called the Footlong – 12inches, for the exhibitionists amongst us!

Medwakh pipes are often handmade, allowing for creativity and style in the manufacturing process – dimensions and design vary to create truly unique styles for the discerning smoker. They’re crafted from a variety of materials including wood, bone, metals (including gold, silver), stone, plastics and glass. They may incorporate precious stones such as diamonds, gemstones and rings of precious metal inscribed with symbols, such as a falcon similar to the UAE coat of arms. Pipes have even been crafted to resemble the dromedary camel, a highly revered animal in the UAE; the opening of the bowl shaped as the camel’s mouth. 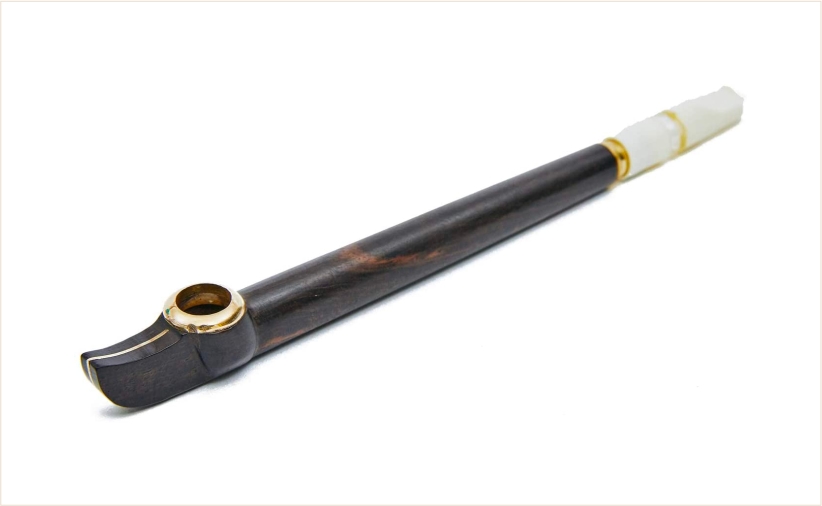 Anatomy of a Medwakh Pipe

Starting from the top, Medwakh pipes usually have an enlarged heel past the bowl to hold them steady while lighting. This is attached to a small bowl, sized for a single hit, which is linked to the shaft – usually 5 to 7 inches (12 to 17cm). Connected to the shaft is the mouthpiece, which usually houses a filter.
The heel allows you to easily grip the pipe without burning yourself and offers a stylish flare to your Medwakh.

Changes in bowl size can affect how big each hit is and therefore how much Dokha you smoke in a week. It can affect how easily you can fill the bowl. Bowl size and shape also have an effect on the smoking experience as a whole. Larger bowls tend to make the smoke more aromatic as it doesn’t all burn immediately. While smaller bowls will smoke faster and usually hotter. It’s all down to personal preference!

Shaft length will alter the heat of smoke pulled through from the bowl to the mouthpiece. A longer shaft will cool the smoke more, but will also provide more resistance, taking more effort to gain the same hit. This is also where the diameter of the air passage comes into play. Along with the filter, the air passage diameter plays a massive role in determining the volume of smoke you inhale. The wider diameter equals more smoke.

Filters vary in composition, but they are all designed to reduce some of the particulates present in Dokha smoke along with tar content (for the efficacy of each filter please see the manufacturer’s websites). They do also influence air flow, helping to smooth out each drag into a steady, continuous stream. 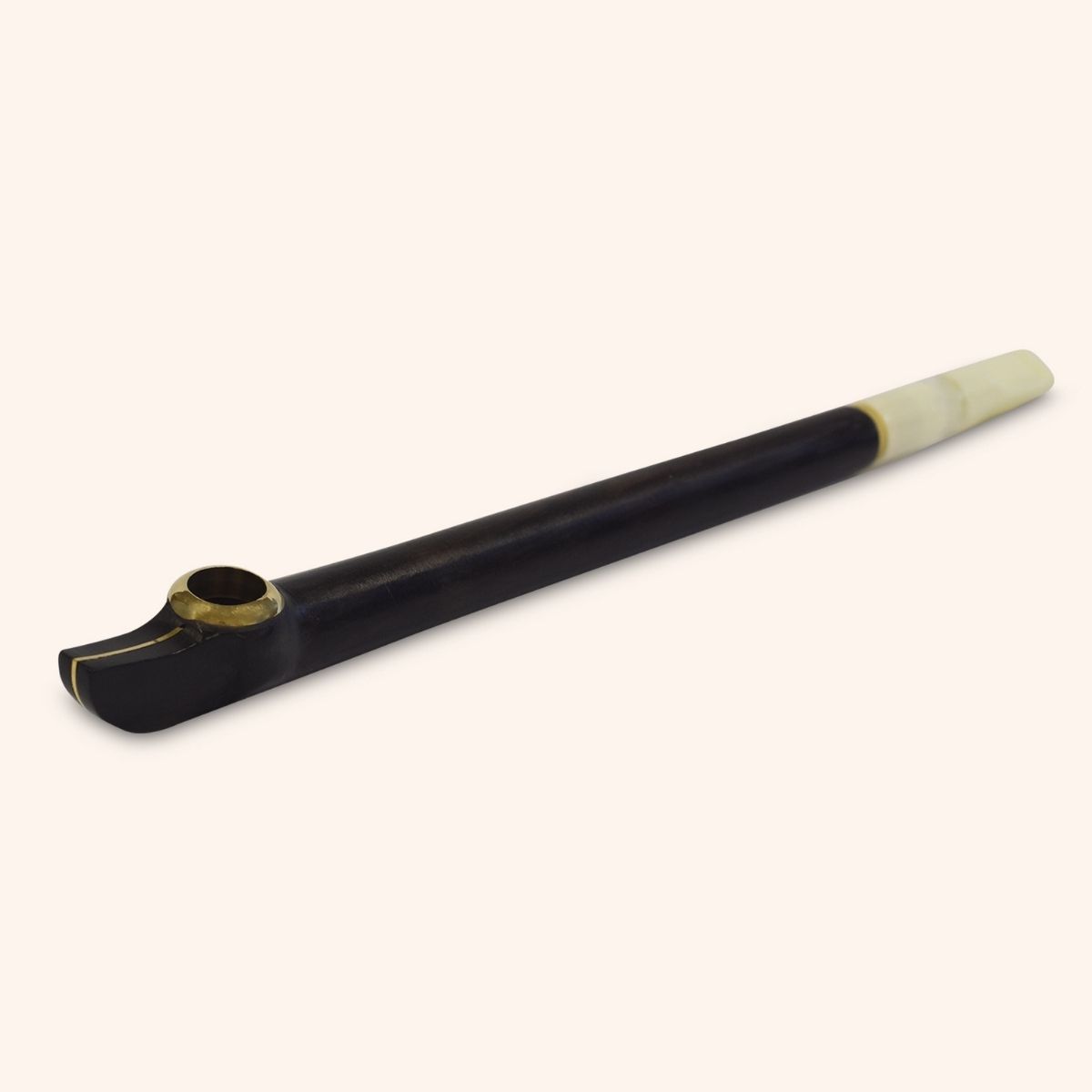 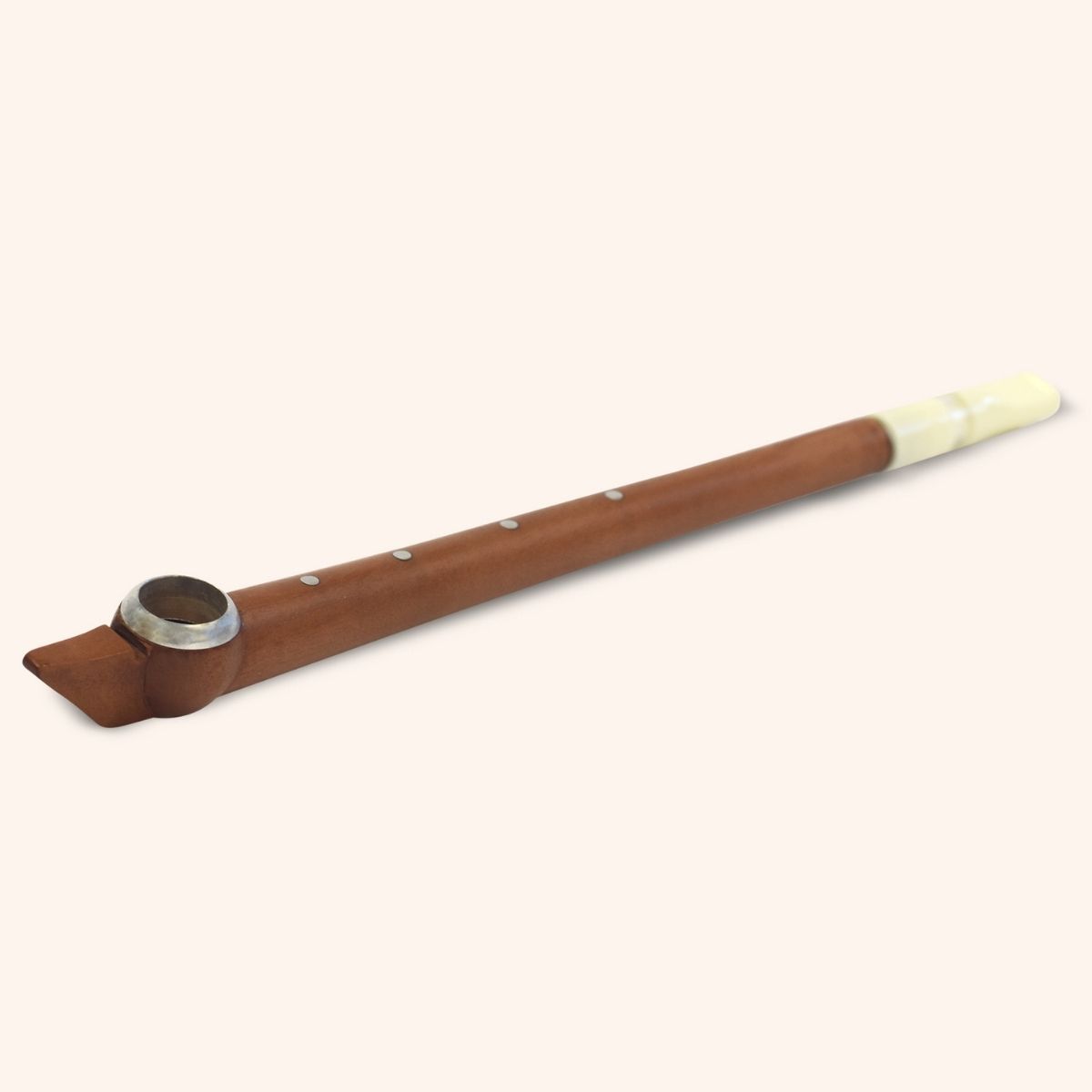 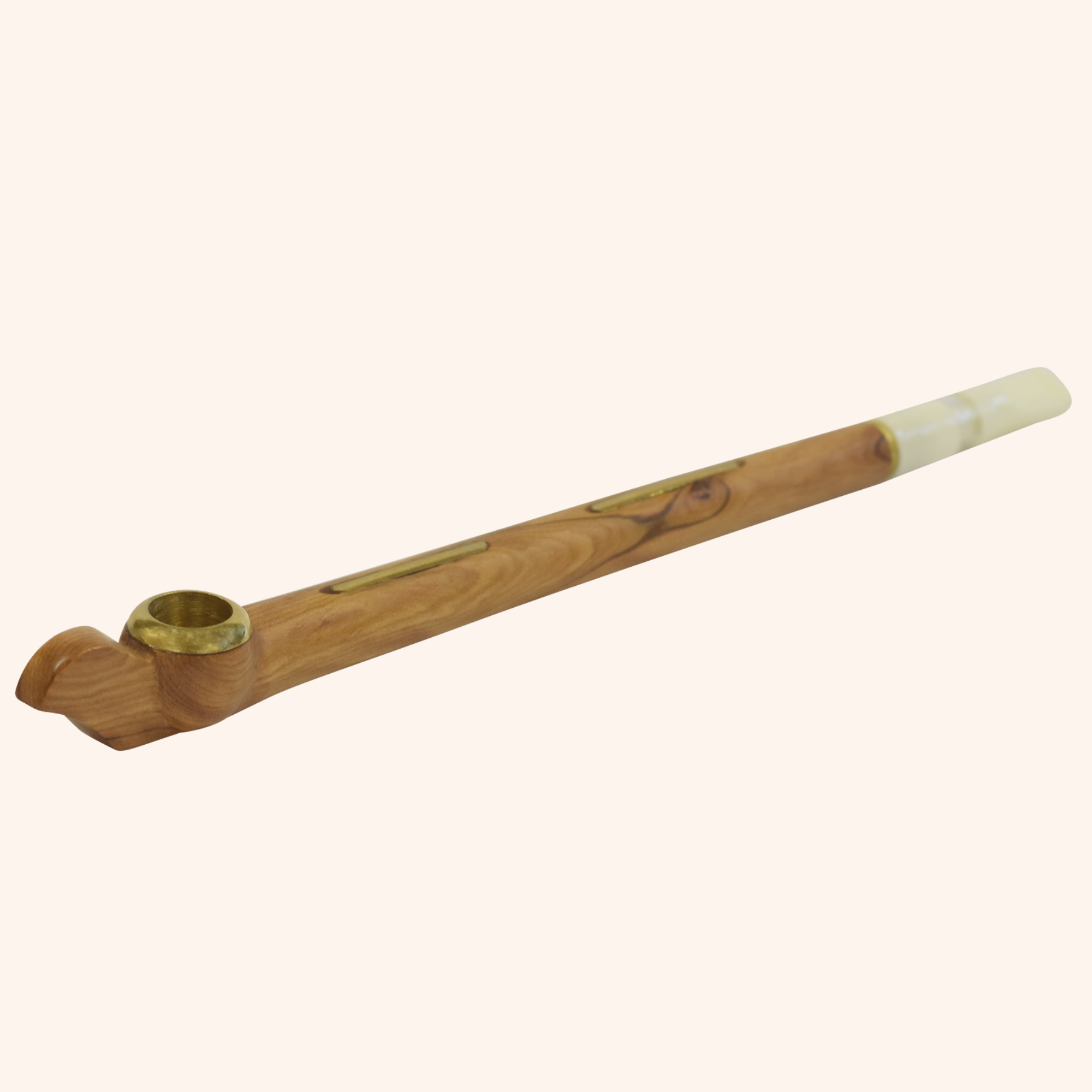 With Medwakh pipes, filter tips are very common – this is a filter housed within a mouthpiece that fits on the end of your pipe. Picking the right tip for you just depends on the filter you like, which mouthpiece is most comfortable and, of course, which suits you and the pipe the most. After all, you’ve got to look good when you smoke don’t you?

There are other designs which incorporate an internal filter, much like the ones used in traditional tobacco pipes and work in much the same way as a standard filter tip.

What are Medwakh pipes made of?

The first Medwakhs date back to the 14th century in Iran were Shepherds crudely carved their pipes from animal bones, often goats’ bones, or moulded from clay. Since then, a lot has changed but the basic design still shines through. Pipes are often still hand carved but much more lavishly engraved, often with brass inlays and even hand painted in a variety of colours.

The range of materials used has increased greatly, with pipes being made from bone, wood, glass, steel, silver, gold, plastics and stone. Wooden pipes are by far the most common due to low cost and versatility of design. A certain elegance can be achieved through good craftsmanship and quality wood which is very desirable. Hardwoods like Walnut, Cherry and Briar are well known to make for beautiful pipes that stand the test of time.

Metal pipes are increasing in popularity simply due to their durability. Steel pipes don’t just snap in your pocket like a wooden or bone pipe might – they last a lifetime.

Novel designers are always bringing out new models in different materials and we keep on top of the market to bring you the finest designs from around the world! 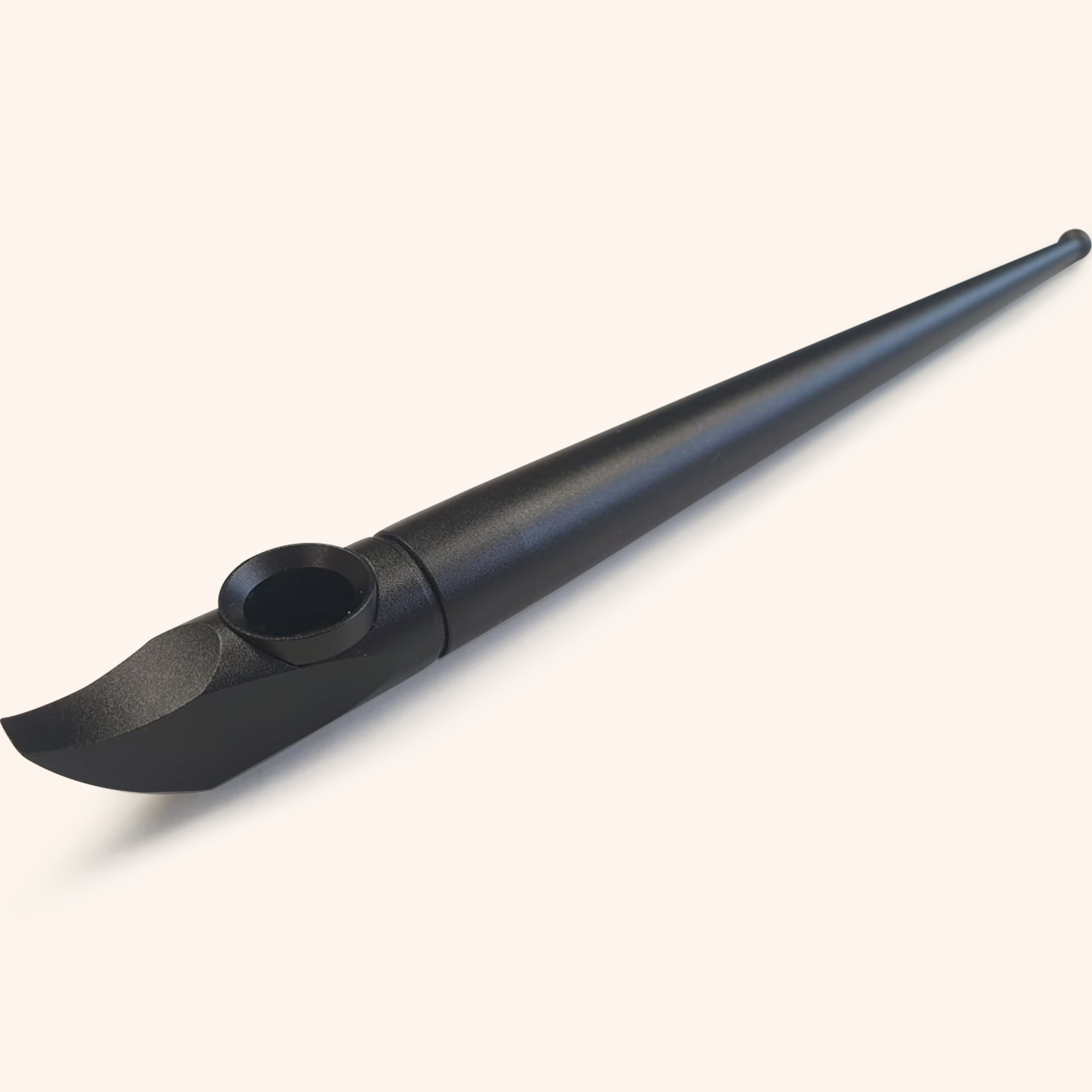 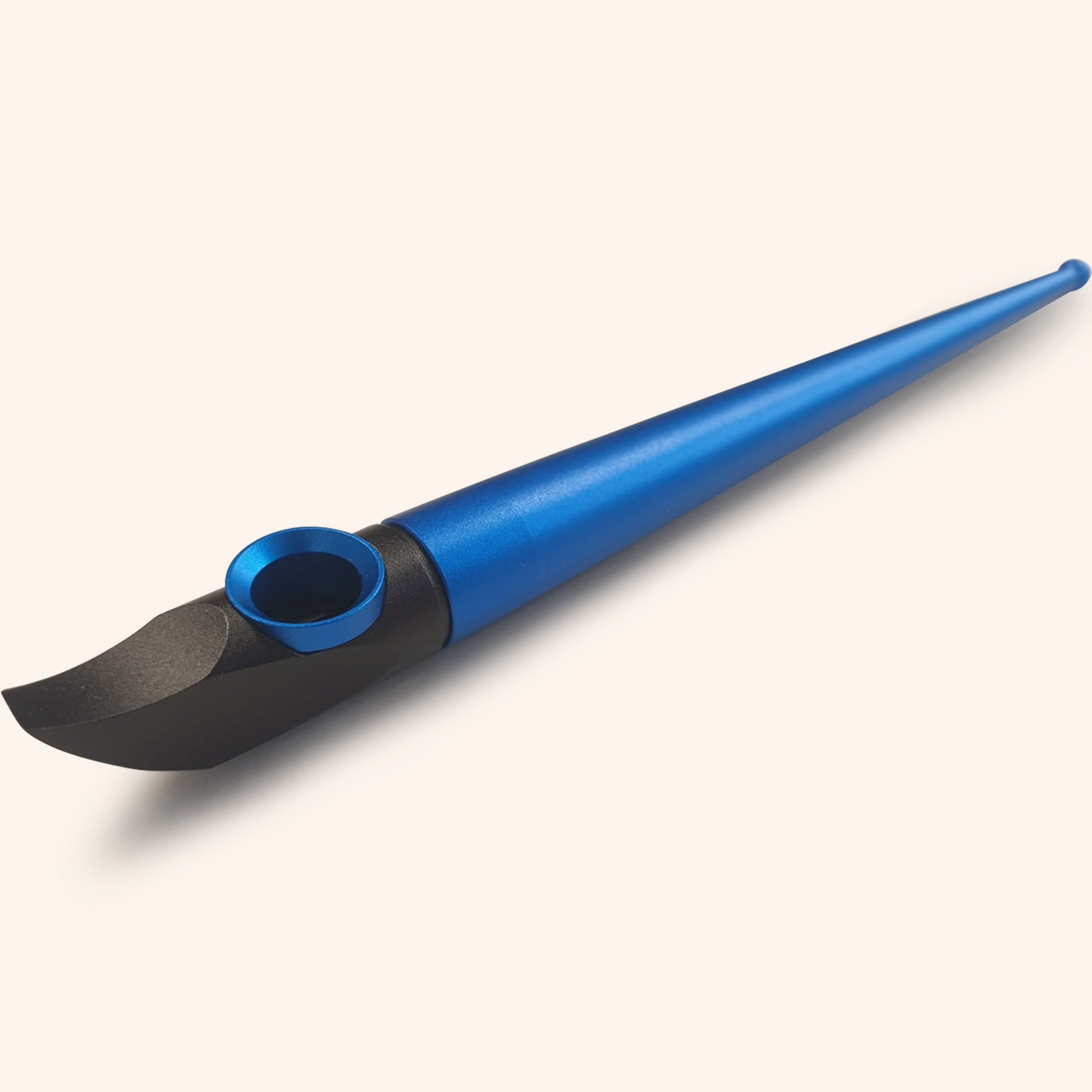 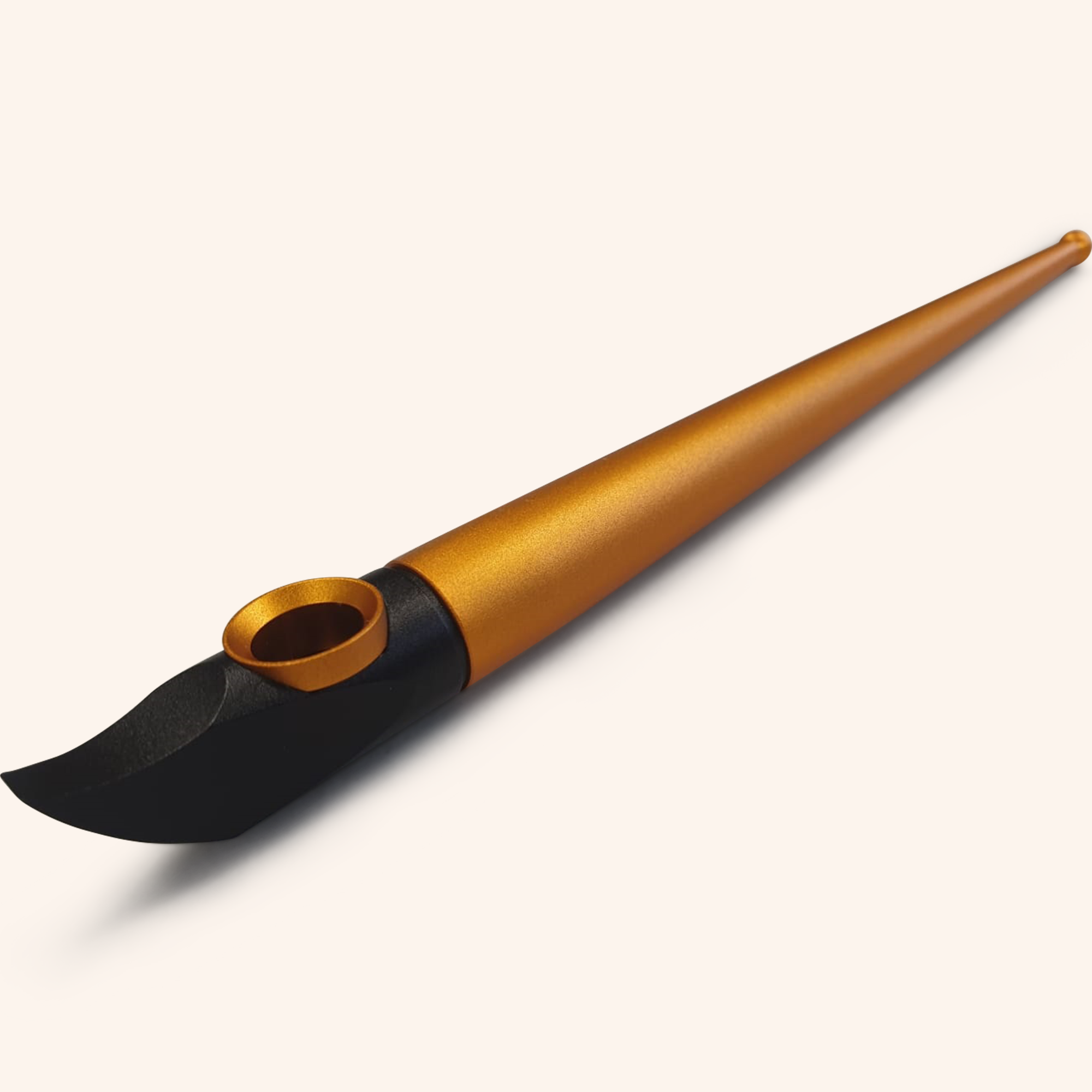 Choosing the right Medwakh for you

With such a wide range of pipes to choose from, you’ll want to think about what your ideal Medwakh looks like. There’s much more than just looks to think about, so here’s some simple pointers to get you started.

Can you smoke a Medwakh without a filter?

The simple answer is yes, but there is a reason pipes have evolved to include a filter. Initially they were incorporated in an attempt to make smoking safer, a notion that remains controversial. They do, however, alter the Dokha smoking experience for the better.

A good filter will help to stop any particles of tobacco from getting into your mouth…
A good filter can have a cooling effect and slows the inhalation of smoke – some Dokha blends can be harsh on the throat, especially when smoking a hotter blend.

There are other inventive and resourceful ways of smoking Dokha – we’ve seen it all in our time at Enjoy Dokha.  In short though, we would always recommend smoking Dokha in a traditional Medwakh, and with a filter! 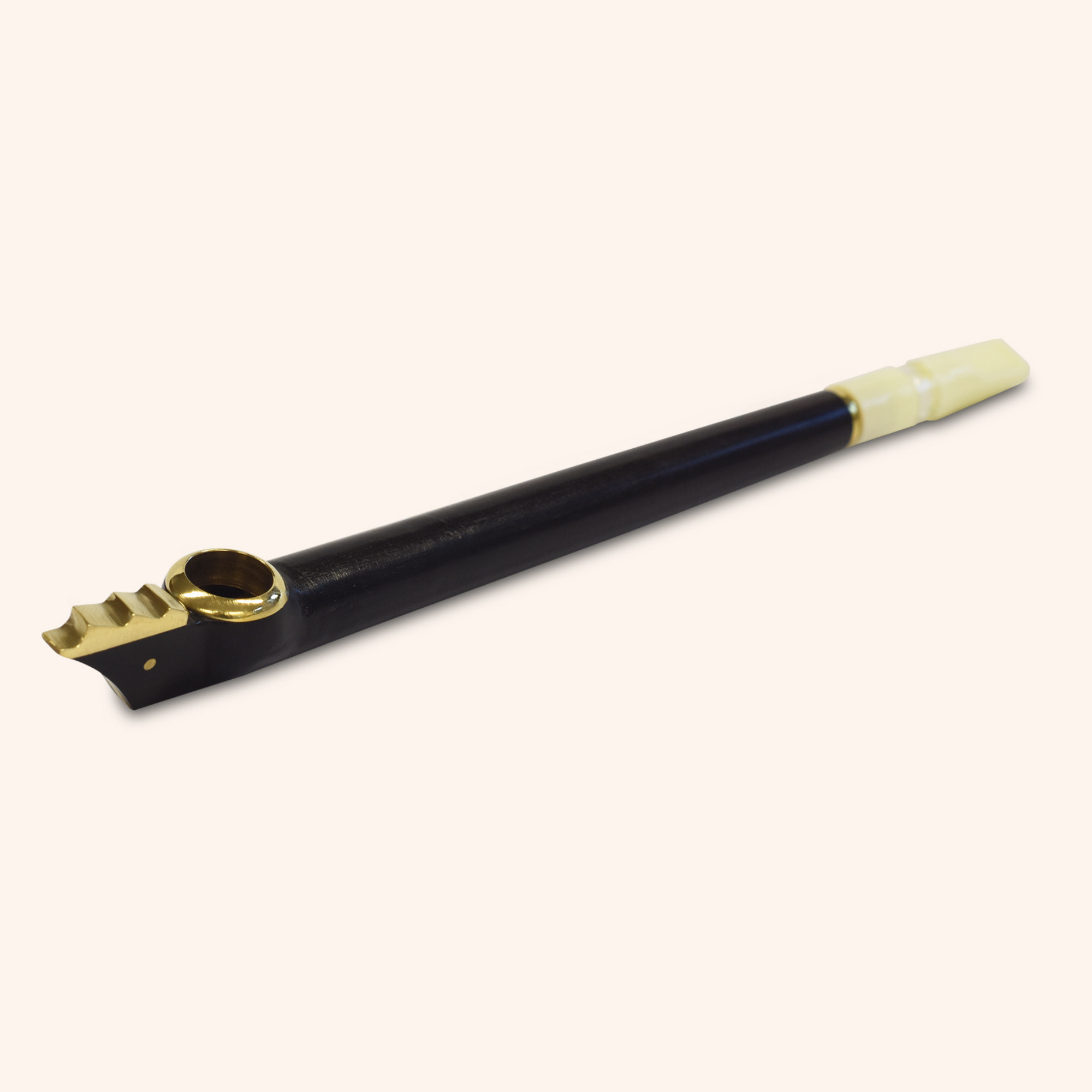 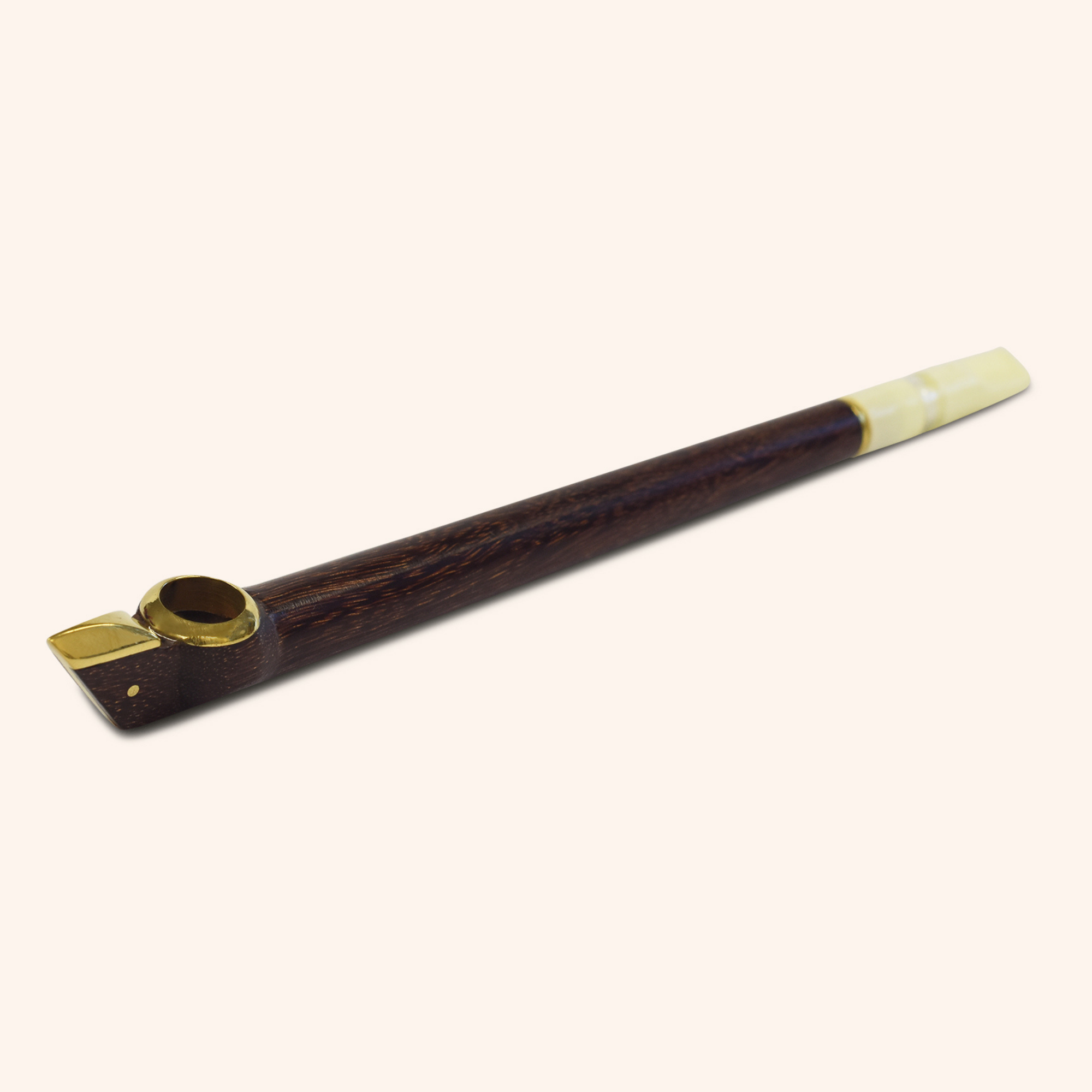 Can you travel with a Medwakh pipe?

Medwakh pipes are great for smoking on the go – they fit neatly into a pocket or Dokha pouch which will easily carry everything you need for a unique smoking experience. The Medwakh Arabic tobacco pipe is designed to be every bit as mobile as you are, so you can take a minute out of your busy day, wherever you are, whatever you’re doing, and have a hit of Dokha.

As for international travel, always check the customs regulations of the country you are travelling to! It is simply loose-leaf tobacco, so it can legally go most places you could take cigarettes – within the personal limits of course. Having said that, we’ve been caught in some sticky situations trying to explain that Dokha is just tobacco to border security. And they’re not usually the most understanding bunch…

What is Dokha Tobacco?
What Dokha is best for me?